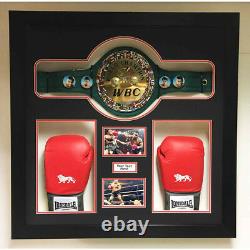 Boxing Gloves and Belt not Included. We can provide you with custom size or ANY SIZE TO ORDER as per your requirement basis. Picture & Photo Frames specialises in providing a wide range of quality picture and photo frames.

Along with our standard size frames, we also manufacture custom size frames. Made in our own factory in the UK. Each frame is individually well wrapped up when delivered. Buyers might be looking for.